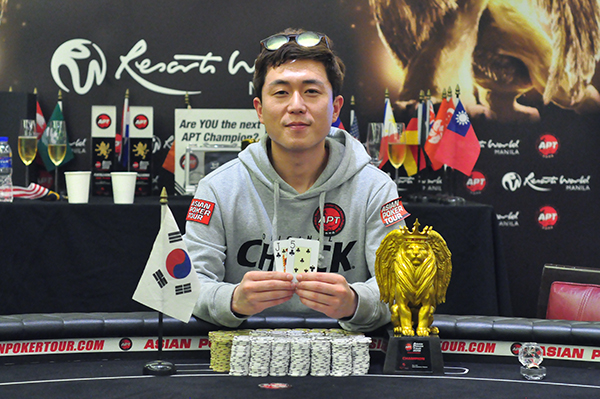 The APT Philippines Championship was just over. Siyoung Lee from South Korea entered the heads-up match against Iori Yogo, a Japanese player who won the tournament twice. This is Lee’s first championship in the APT event, and he also earned a $102,000 championship bonus. He also won a special APT championship trophy and ring.

A total of 316 people bought in the championship game from May 1st to 5th, and 32 people entered the money circle.

Iori Yogo was the biggest bargaining player at the start of the day. He was also the most famous player on the final table. He won multiple championships in the APT event and won the championship twice.

When the four-person match lasted for a long time, Ahn fell from the big stack to the fourth place.

Yogo entered the heads-up with a 4:1 chip advantage, and soon Siyoung scored 22 all rounds against his opponent’s T9 square flush, Siyoung hit Hulu to win. Siyoung then used A♣ 7♦ to bet continuously on the public board of 5♠ 6♥ 5♦ 6♦ 2♣, and the Japanese player chose to pay.

Yogo’s hand Q♦ Q♣! Siyoung’s hand J♣ 5♣ is behind, but the river card is a box of 5! Siyoung won the championship!